Initially the El Don Neighborhood Advisory Committee was organized in opposition to Sierra College’s plans to develop 107 acres of property across the street from the College in two locations off Rocklin Road. Of specific concern is the development of 36 acres at the S/E corner of Rocklin Road and El Don Drive. Through the center of this property is an incredible wildlife and riparian corridor that we want to stop any form of development. To allow any development in this area would completely destroy the habitat to an enormous amount of wildlife.

We are also concerned about what will be built in the overflow parking lot across from the main campus entrance as well as the 72 acres at the N/E corner of Rocklin Road and Sierra College Blvd. Roughly speaking the overall project consists of 80% very small lot, two story house subdivisions by Cresleigh homes an out of country developer who in our opinion builds terrible tiny lot subdivisions. I believe we are looking at 400-600 new houses, a senior center, retail and other uses within this project.

The College’s project is referred to as Sierra Villages (North and South). The Notice of Preparation (NOP) of the Environmental Impact Report (EIR) will be out soon (sometime in April). This will be our first opportunity to comment on the project and will be the first time we will finally have the complete details of the project. Initial and limited project details located on City of Rocklin’s website at http://www.rocklin.ca.us/post/sierra-villages.

Much work has been done over the past year and a half in preparation for the College’s development. Along the way we began to realize there are many, many new developments coming to our area. Reattaching list of all the pending projects. All this new development is going to create over 70,000 new cars on our streets.

During this journey we assisted our sister community group, Citizen’s Voice, with their battle against the City and developer on the Sierra Gateway 3-STORY, 195-unit Apartment project at the S/E corner of Rocklin Road and Sierra College Blvd. In December 2017, the City Council unanimously approved this towering monstrosity which allowed the removal of 400 mature oak trees. Citizen’s Voice filed suit against the City and the developer in January. And as you all know by now and even though there is a pending lawsuit, the developer came in and demolished all the trees. 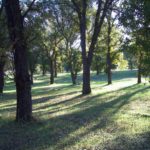 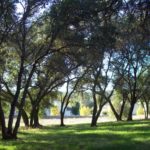 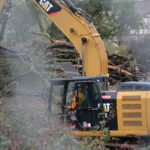 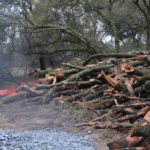