The State of California requires jurisdictions to provide X number of low income housing units.  Part of that process includes the City setting aside land that can be developed for this type of housing.  That is accomplished by rezoning large areas of land around the City to very high density residential zoning (minimum is 22 units to the acre).

Between 2013-2021 the City of Rocklin was allocated to provide 1,769 low-income housing units (basically low rent apartments).  The City has failed to provide any.  But what the City has been doing since 2013 is rezoning thousands of acres of land in our City to high density residential in “hopes” that some developer would actually build these types of units.  Unfortunately, NO developer has opted to build low-income housing as there isn’t a large enough profit margin. Rather they have benefited $$ greatly by now being able to build NON-low income housing in small lot subdivisions and expensive apartment complexes around the City and make a huge financial gain in the process.  This has been going on for at least five years now with no low income units built but hundreds if not thousands of units developed in our City that have created impacts on public services, schools, increased traffic, etc.

Last year the City decided to form a Regional Housing Needs Allocation (RHNA) ad hoc committee to address the problem of not meeting state housing requirements.  Unfortunately, they stacked the committee with small residential lot and apartment developers and the like.  The result:  rezone more land to high density residential.  According to their presentation (see above link) NOTHING has changed. All they did is pick out more land around the City to rezone to high density.  THEY DID NOT SOLVE THE ACTUAL PROBLEM OF MAKING DEVELOPERS BUILD LOW INCOME HOUSING on these rezoned properties.  Just more land to be rezoned for developers to cram in thousands of more small lot houses or apartment units.

Please attend this hearing:  Listen and Learn as well as Voice Your Concerns 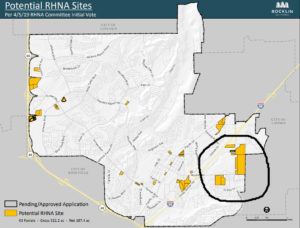